Problems With The Colon 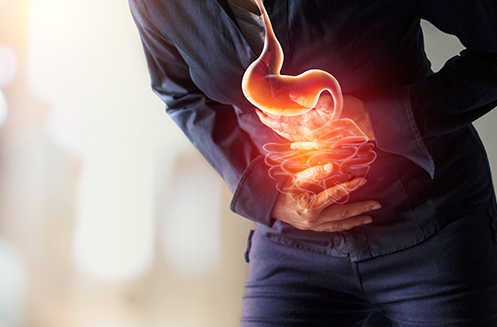 Constipation
Constipation is one of the first signs that your bowels are not functioning properly. Constipation especially plagues those engaged in sedentary occupations, those who have poor eating habits, and those not drinking sufficient water. When a person is constipated, the walls of the colon are often impacted with accumulated fecal matter. The inner diameter of the colon is reduced like a water pipe with a buildup of mineral deposits. Eventually, the opening becomes narrower, making it more difficult for wastes to pass. Since the encrusted feces line the colon wall, the colon is unable to absorb nutrients from our food.

Wastes from the blood, which should normally be drawn into the colon through the colon walls, are reabsorbed by the body, along with other toxins resulting from the fermentation and putrefaction of incompletely digested food. Subsequently, intestinal stasis often follows, occurring when the muscular contractions known as peristalsis can no longer sweep the hardened feces along the digestive canal. A person can have several bowel movements a day and still be constipated.
This is because movements are usually smaller and occur more frequently when the inner diameter of the colon is smaller than it should be. The reaction to this constricted bowel is an increase in the frequency of peristalsis (wave action) to allow the waste to exit the body. Taken to its limit, the effect can be diarrhea, which occurs when the large intestine hastens evacuation to the point that the bowel doesn’t have time to remove the water and consolidate the waste into solid stool.

Irritable Bowel Syndrome (IBS)
Irritable Bowel Syndrome (IBS) is a puzzling digestive disorder in that there are no physical signs of disease in the bowel tissue. This makes it difficult to determine the causes of the syndrome, even though the symptoms are numerous and varied, including alternating constipation and diarrhea, nausea, flatulence, bloating, and intolerance to certain foods. Arthritis has also been linked to those with irritable bowel syndrome. Because digestion evokes adverse reactions such as nausea, vomiting, headaches, and pain, persons with irritable bowel syndrome often have difficulty eating, which can result in malnutrition. Many nutrients are cannot be absorbed properly and those that are can quickly be depleted by diarrhea. One symptom common to irritable bowel syndrome is irregular contractions in the colon. This impedes the movement of waste in the colon, precipitating and environment for harmful agents. Irritable bowel syndrome is the most commonly diagnosed digestive disorder, with one out of five adults having symptoms.

Colon hydrotherapy helps restore the balance of bacterial microflora in the bowel.

Diverticulitis
It is generally accepted that problems associated with diverticulitis are rooted in the modern diet. Most diets consist of highly refined and processed foods which have a tendency to “slow the flow”. For our bodies to mimic a gently flowing stream, a crucial factor is transit time: the time that lapses between eating a food and the elimination of its waste products. If transit time is prolonged, harmful toxins will form. Fecal matter is not successfully evacuated and remnants collect and harden on the walls of the colon. Over a period of time, the inside diameter of the colon becomes smaller. Greater effort is then required by the colon’s circular muscles to move this compacted waste material. This internal pressure causes small pockets, called diverticula, to develop along the colon. Eventually these pockets become infected, causing diverticulitis. This condition includes possible internal bleeding and tissue breakdown. An article in the American Heart Journal (April 1973) forward this hypothesis: “A high residue diet promotes repaid transit of intestinal content with the passage of large, unformed stools. In contrast, the low residue diet…of modern Western civilization results in prolonged intestinal transit times with the passage of small, firm, formed stools. In the later situation, not only are [certain] pressures in the colon greatly raised, with resultant appendicitis and [bowel] disease, but the intra-abdominal pressures are also greatly raised during straining at constipated stools.”

Parasites
In addressing any colon problem, it is important to restore the body’s natural peristaltic wave action. This is done by introducing friendly bacteria into the bowel. The objective is to restore the bowel’s normal pH level so that the colon is slightly acidic. Once the colon is cleansed, this can easily be achieved with the use of supplements. Generally, worms and parasites are unable to love in this balanced healthy environment, primarily because of the slightly acidic pH level. As they vacate the colon, it is not unusual for the therapist to witness their departure through the viewing glass. Interestingly, some parasites may be microscopic, while others are as wide as the thumb and several inches long!

Bacteria are considered to be plants. They grow and divide at various rates. Most bacteria are helpful to the colon in rendering body sewage harmless in much the same way that bacteria is employed in commercial sewage treatment plants. While there may be harmful bacteria in the intestines, so long as they are outnumbered by the beneficial bacteria, the body stays well. In particular, the lactobacillus and acidophilus bacteria are highly beneficial. When the colon is restored to its proper pH balance, bad bacteria is subdued by friendly bacteria. Spaces are also created into which other organs can dispose of their residue. The liver, bloodstream, and lymph all begin to do this, because how there is an open pathway for proper elimination through the colon.

Hemorrhoids
Hemorrhoids are swellings or dilation of the veins of the anus; varicose veins at the lower end of the large bowel or rectum. Basically, there are two kinds: internal and external hemorrhoids. When complications arise, they may be quite painful and perhaps may rupture, causing bleeding. According to some authorities, one third, if not more, of all adults have hemorrhoids in one form or another. In many cases, however, the situation is not such that the person is aware of having them. It’s been long known that constipation causes, and worsens, hemorrhoids. In most cases, the mechanism for the hemorrhoids problem is the same as that for varicosities: strain causes increased pressure in the veins, resulting in a ballooning out and breakdown of the vein wall, whether it be the hemorrhoids plexus or the veins of the legs. Conversely, an acute case of diarrhea can bring on an attack of complicated hemorrhoids. Inability to relax the muscles in the anus may also bring them on, and this, in turn, may be caused by poor eating habits.

Inside The Colon
How The Colon Works